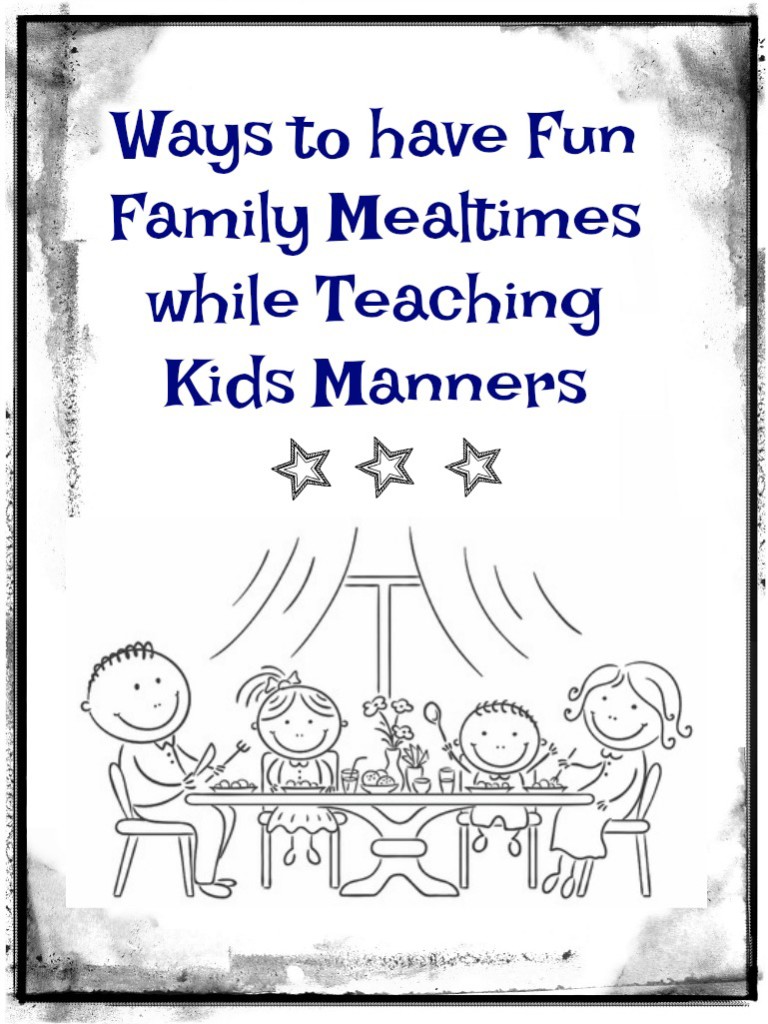 Ahhhh, dinnertime!  Does anyone else have this picture perfect image of what dinnertime with your family should look like?  So, that image in my head has never matched up with reality.  Our kids are actually pretty decent most of the time but there’s your typical whining and complaining mixed with some manners that are always needing work.  And, when I watch the great examples of my sisters with their kids, I try to remember to add a little fun to the mix instead of just harping on the kids over every little thing.  The fun part doesn’t come naturally to me, so I really have to think about it and inspiration usually comes into the equation, too.  And I really do believe that the 3 ideas I’m going to share with you were inspired.

In fact, with our manners buzzer, I had the thought pop into my head while I was sitting at the table making constant corrections to my kids for their bad table manners and getting exasperated with every correction I made.  I dismissed the thought several times before I finally listened, got up from the table, got out a buzzer, and told the kids about our new “game”.  I have no doubt it was inspiration from God – the way it just popped into my head and wouldn’t let go until I followed through.  I believe He can give us those little bits of needed inspiration all throughout our day as we are parenting to the best of our ability and relying on Him to help make up for what we lack.

Each of these ideas are fun ways to use the dinner table as a place of learning.  And honestly, the kids love them all.  We use them when needed but not necessarily all at the same time and not all the time, either.

The idea behind the Manners Buzzer is that you want to try to go all of dinnertime WITHOUT being buzzed.  The first time we pulled it out, they wanted to be buzzed because it was fun.  But I just reminded them that the goal is NOT to be buzzed and they followed along after that. So, I kept the buzzer by me and anytime I saw a child doing something with bad manners (eating with mouth open, reaching across the table, not sitting in their chair correctly, etc.), I would buzz them which gave them a fun reminder that they needed to fix something.  It really made a difference and they responded to a buzzer a lot better than to mom and dad telling them to change something.  It really did work and I need to pull it out again since the good manners have been slipping a bit.

I just used a buzzer pulled out of our Taboo game.  It’s an awesome buzzer with a silly buzzing sound but you could pull one out of any game or use something else like a bell or anything else that makes noise.

Our kids went through a terrible time of instantly complaining that they didn’t want to try something new because it was going to be gross.  I got tired of fighting with them about it and instituted VICTORY LAPS.  How it works is anytime we have something new or there is something on their plate that they don’t like, if they take a taste of it they get to do a Victory Lap around the table.  They get up from their chair and jog once around the table as we clap in unison and chant their name.  It became rare for a child to whine and complain and instead they would quickly eat their bite so they could do a Victory Lap and they always did it with a big smile on their faces.  Wow – that was a big difference from me threatening no dessert or whatever until they tried at least one bite.

I really don’t know what circumstances brought about our next game, other than the fact that I wanted to teach my kids about healthy foods so they could make good choices when they were at the age to start making food choices for themselves.  I wanted to teach them that while we have some less healthy foods with dinner sometimes, its always better to fill up on the healthier foods and not overload their plates with the junk.  We talked with them about what kinds of foods are healthy and then every time we started eating dinner I would shout out, “Name that Healthy Food!!”  The kids would call out the healthy foods on the table, usually the fruit or vegetables and it was a great chance for my husband and I to add to the list any items that they might have missed.  It would then lead to discussion about part of the dinner being not the healthiest but okay as long as we eat it in moderation.