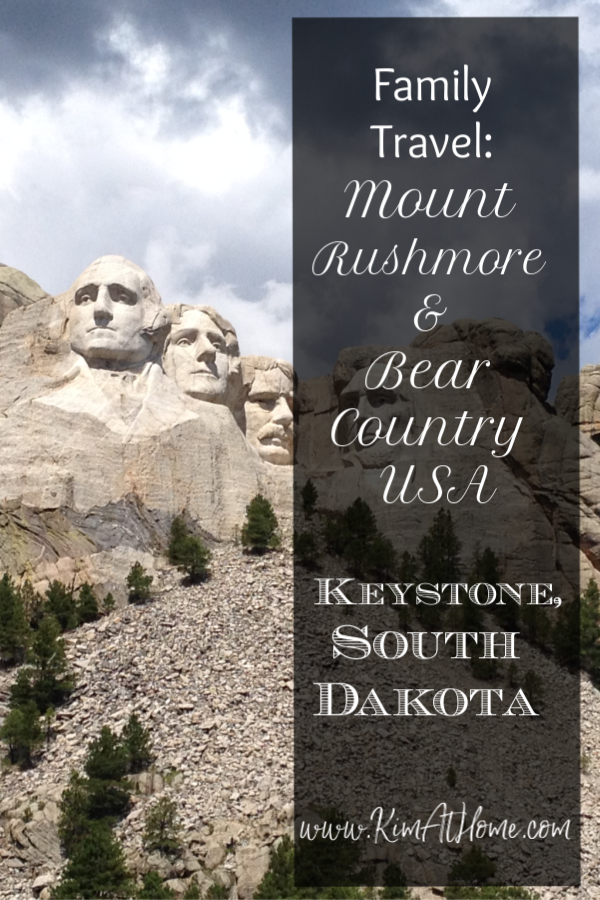 Mount Rushmore is such a cool family trip to take!  We did it in a day trip from Denver, Colorado.  It was a really long day (about 6 hours drive each way) but we had a great time.  There are quite a few things to do around Mount Rushmore but since we drove there and home in a single day, we didn’t do it all.  What we did do:

It’s just a mountain, right?  But the mountains in the area are gorgeous and seeing the faces sculpted in stone is quite incredible.  I didn’t know if the kids would really appreciate it but they still talk about it often and how they’d love to go back.  I love the view as you walk in with all the flags lining the walkway and Mount Rushmore in the background.  It’s a great spot for the first of many pictures! 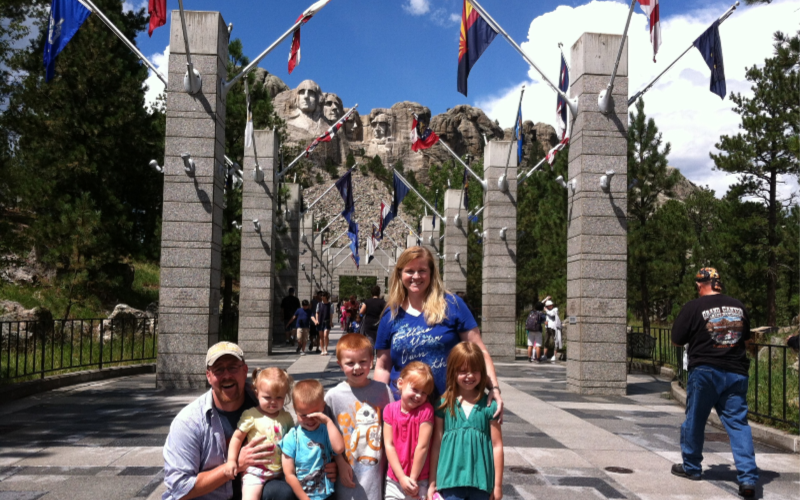 Mount Rushmore’s Avenue of Flags as you walk toward the mountain. Our kids love flags and it was fun for them to point out all the ones they recognized. 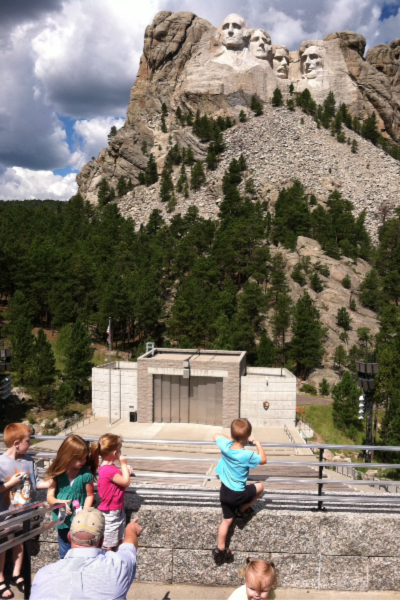 Looking over the amphitheater at Mount Rushmore.

The Presidential Trail and Sculptor’s Studio

Aside from looking at the sculpted mountain and checking out the visitor’s center, you’ll want to take the Presidential Trail and do some exploring.  Its a beautiful walk that gets you up closer to the base of the mountain.  Down at the bottom of the path (at the bottom of quite a few stairs — don’t take a stroller) is the Sculptor’s Studio.  We might not have wandered in there but as luck would have it, it started raining right as we got there and so we ducked inside for cover.  And just in time because they began a presentation where they gave information and told some stories about how Mount Rushmore was made . . . built . . . whatever word you want to use.  Its really quite incredible and hearing the details was so much better than just looking at the mountain!  The park ranger who gave the presentation was very good at making it interesting for the kids and even brought one of our little ones up front to use as part of a demonstration which made it extra memorable. 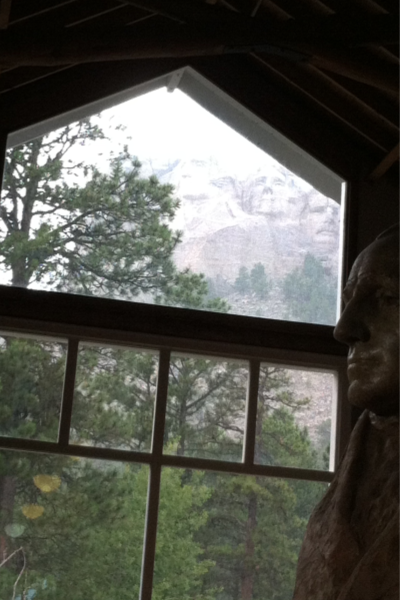 Looking through the rain coming down outside the large window in the sculptor’s studio, you can just make out the faces carved into Mount Rushmore.

I hear there’s also a lighting ceremony in the evening.  That sounded like something that we would’ve liked to see but we had a 6 hour drive ahead of us and still wanted to check out one more stop so we had to plan our visit during late morning/early afternoon hours and missed the lighting.

As much as we all loved Mount Rushmore, I think Bear Country USA was an equal highlight of the trip.  When people recommended it, I was a little skeptical, but they were right.  You drive this path through a wildlife park and the animals are roaming all around you.  There’s a little map that tells you which animals are in which area.  They have a TON of bears and in that section of the park they are all over the place.  But what was really awesome was when they started walking right toward us and walked right next to our stopped cars.  We really could’ve spent hours there just sitting in the car and watching the animals. 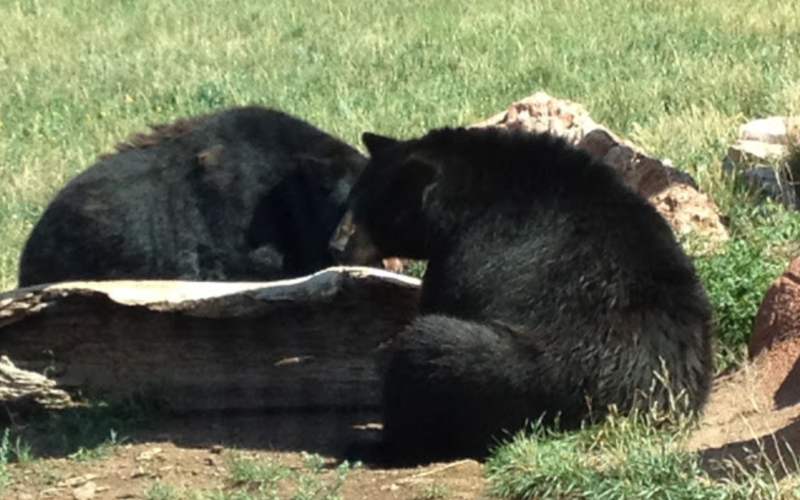 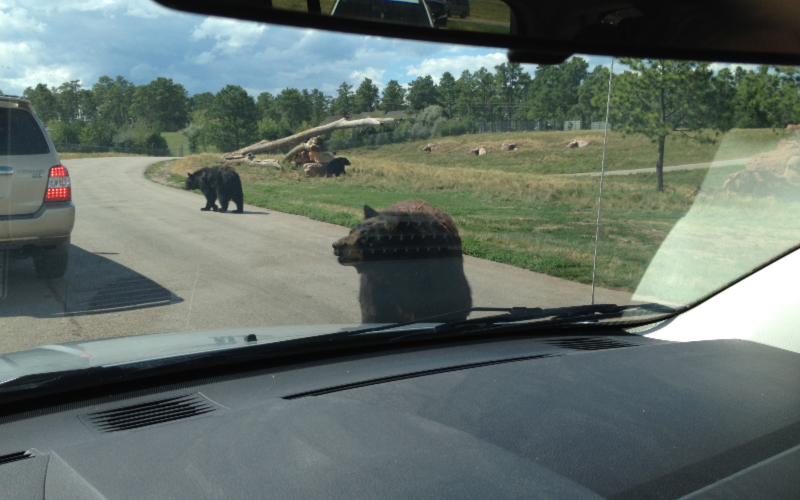 After you leave the driving area, there’s a place where you can park with a gift shop and some animals that are in enclosures that you can walk around and see.  Kind of like the zoo but only a few animals; it wasn’t very extensive.  What was super fun was the bear cubs.  We watched them climbing in trees and playing around and if we didn’t have a whiny kid with us who fell and scraped his knee when running on the path (after being told repeatedly to walk) we would’ve stayed and watched a lot longer. But lets face it, after a very early morning with a 6 hour drive and Mount Rushmore, they were tired!

So, if you’re going to Mount Rushmore, be sure to make a stop at Bear Country USA while you’re there.  And whatever you do, mind your speed on the drive . . . we got a ticket on the way home 🙁 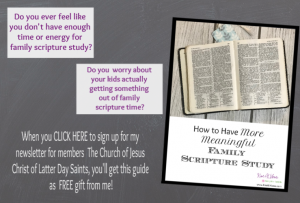