Breanna had an overnight sleep study at the hospital last Thursday. Jeff was the one to go with her and it’s always hard for me to watch them walk out the door on the way to the hospital without me (he has done all the sleep studies). The report he gave when they got home the next day was that they took her off the oxygen when they first started the test and never put it back on her during the whole night. Typically, when her oxygen saturation drops too low for too long they would come back in and start the oxygen again. So, that was fantastic news. 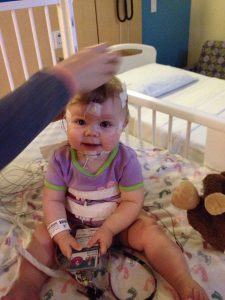 But then we had to wait to hear from the doctor. Just waiting for the day of the sleep study had had my stomach in knots for a couple of weeks. So, waiting to hear from the doctor just drug that on a bit longer and I made sure my phone was next to me at all times. The call came this morning when we were all outside – the kids were cleaning the car, Breanna hanging out in the stroller, and I was getting ready to mow the lawn. The doctor said she had a few breathing abnormalities but nothing that caused him much concern and pretty much within the normal range. She still has a few occurrences of breathing pauses but he thinks she’ll be fine without the supplemental oxygen!

We took her off the oxygen back in January but it only lasted a couple of weeks until she became irritable, wasn’t sleeping well, and then her feet and hands started turning purple and blue. So, the doctor said that this would be kind of a trial. We are cautiously optimistic that she’ll do fine breathing on her own now. But we still need to watch for those signs of distress to start up again which would require going back on the oxygen. For now, we’re happy to be tank and tube free! She got to nap in her crib without being swaddled or strapped into a chair. She is free to roam around as far as she wants without a 7 foot tether (oxygen tube) attached to her face. I am still constantly looking to check that the tube is still positioned correctly and that she hasn’t pulled it off her face, but that habit will disappear with time and I am not having to carry a tank in addition to a baby every time we want to move around.  Its been a long 10 months!  Today is a great day and we are hoping that days like this will now last a lifetime.